Avery Churchill is an important member of the Resistance from South Carolina, she was one of the four pilots who traveled by plane to find survivors.

Avery was one of four pilots that was sent by the Continental Congress to find survivors and report back to the congress. She says that there is a government and central command for the military located in Charleston, South Carolina.

She flies a bright red single-seat Biplane, which she asked the 2nd Mass not to touch because it is booby-trapped. She says she flies low to avoid detection. Avery attends Jimmy Boland's funeral, and before leaving for Greenland she speaks to Weaver about the 2nd Mass, then her plane can be seen flying over Weaver and he salutes her. Her current status is unknown.

While talking with Arthur Manchester about the Charleston government, Tom Mason mentions how Avery had told the 2nd Mass about it. With a smile, Arthur calls Avery "a hell of a woman." 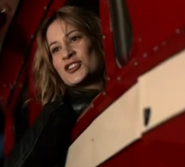 Add a photo to this gallery
Retrieved from "https://fallingskies.fandom.com/wiki/Avery_Churchill?oldid=48969"
Community content is available under CC-BY-SA unless otherwise noted.