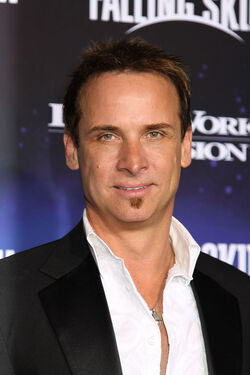 Colin Cunningham is an American television and film actor, best known for his role in the TNT drama Falling Skies.

In Falling Skies, he portrays John Pope, the leader of a band of marauders, who introduces himself to the 2nd Mass by taking a group of hostages and offering to exchange their freedom for weapons. For reasons known only to him, this smart, resourceful and charismatic ex-con takes great pleasure in killing Skitters, even hunting them like wild game. A shameless opportunist, Pope considers the invasion the best thing that ever happened to him. Despite all his questionable motives, Pope remains a powerful member of the 2nd Mass.

Colin has had a recurring role on Stargate SG-1 as USAF Major Paul Davis, and has a major role in the award-winning Canadian series Da Vinci's Inquest. He appeared as Steven Lefkowitz in the short-lived jPod and in several episodes of The L Word. He starred as an anti-clone activist named Tripp in the 2000 thriller The 6th Day, and as the character McCabe in the 2005 film Elektra.

Colin wrote, directed, and starred in a short film titled Centigrade, a contemporary thriller, and it was the winner of the 2007 Kick Start Award.

Add a photo to this gallery
Retrieved from "https://fallingskies.fandom.com/wiki/Colin_Cunningham?oldid=43211"
Community content is available under CC-BY-SA unless otherwise noted.