Diego's Group was a group of survivors led by Diego. The group consisted of 15 members, kids ranged from as young as six to as old as 20. The group relied on themselves, and do not trust the adults.

Not much is known about the kids and teenagers before the invasion. Jeanne Weaver was the daughter to Daniel Weaver, the leader of the 2nd Mass and Diego lived in Pennsylvania with his family. The others were all assumed junior and seniors in school who lived with their families.

After the invasion, the kids were all exasperated from their families, most likely because they were killed by the aliens. The kids all ended up joining a group keeping each other save, with no adults around to get them killed. The group did not want to fight but wanted to hide from the aliens. With 15 strong, the group hid in a garage in Richmond, Virginia. The older members worked on fixing their bikes, and the younger played, however all carried guns.

Diego and Jeanne stole the bikes from two survivors, Hal and Ben. The two followed them back to their base, were they took their bikes back. Hal, seeing that their were only kids took them back to the 2nd Massachusetts Militia Regiment to give them spare bike parts and a good meal. Jeanne reunited with her father Daniel Weaver, however when they went back to their base, eight kids from the group were captured, and the rest soon followed when they tried to save them from the Harnessing factory. Jonny, Sean and two others were harnessed, however the others were all saved by the 2nd Mass. 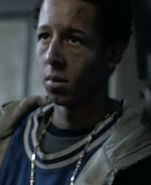 Retrieved from "https://fallingskies.fandom.com/wiki/Diego%27s_Group?oldid=42693"
Community content is available under CC-BY-SA unless otherwise noted.