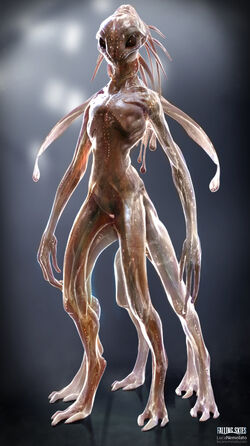 "A force far greater than your mind can comprehend. But defeating them is why we strayed so far from our own galaxy."
—Scorch to Tom[src]

The Dornia, also referred to as the Great Enemy, are an alien race considered by the Espheni to be their greatest foe. They are also the first race that the Espheni enslaved and, therefore, the basis for the Skitter slave race. According to the only seen Dornia, the race is all but extinct with only that member being left. The Dornia got their revenge when Tom Mason wiped out the Espheni with a bioweapon given to him by the Dornia.

The first species to have been enslaved by the Espheni, they were genetically modified by harnesses into the first Skitters, but a portion of the species managed to escape enslavement. According to the Volm, the Dornia have been extinct for hundreds of years.[1]

However, they were not rendered extinct as thought and have been fighting a thousand-year war across two galaxies against the Espheni. As the Dornia travelled from planet to planet they selected a single being of each race they came across to be a warrior whom they believed to be the perfect warrior who could avenge their species, the most notable being human resistance leader Tom Mason.[2]

By the time of the destruction of the Espheni Power Station, only a single Dornia is left living; determined to honor their species by exterminating the Espheni, it presents Tom Mason with the bioweapon.[3]

The Espheni Overlord Scorch informs Tom Mason that the Espheni's reasons for their intergalactic expansion lies with their race being in constant pursuit by a dangerous force who they fear more than the resistance or even the Volm.[4]

The construction of the Espheni Power Station on Earth's moon served as a weapon they intended to use to power their war machine against the arrival of the Dornia. Its destruction left Espheni occupational forces on Earth in severe disarray, allowing Volm reinforcements to return to Earth to assist the resistance, while also allowing the Dornia to enter Earth's solar system and its surrounding star systems. A member of the Dornia race intercepts Tom Mason's captured beamer as it is sent hurling away from Earth at tremendous speed.[5]

This Dornia speaks to Tom in a holographic version of his Boston bedroom, appearing as an image of his wife, Rebecca Mason. It hints to Tom about ways to stop the Espheni, and creates an image of a Woodrow Wilson bust to lead Tom to a nearby Espheni hideout. It then sends Tom back to Earth, and he lands in a nearby ocean.[6]

The Dornia alien continues to help Tom Mason who returns to Chinatown. It changes its form to appeal to Tom, usually as Rebecca Mason, his wife. The Dornia helped Tom Mason find his warrior inside, to find the nearby Overlord, and inform that Hal Mason would collapse due to starvation.[7]

Cochise identifies that alien that Tom has seen as a Dornia.[1]

The Dornia later contact Tom and tell him about themselves and that his greatest battle with the Espheni is coming. They also reveal that the reason they use Rebecca's image to communicate is because they cannot exist in the same matter as humans, as it is fatal to them.[2]

As Tom is hunting John Pope and his band of survivors who hold his son, Hal, hostage, the Dornia try to convince him to return to the 2nd Mass. They tell him that they are creating a weapon that will destroy the regrouping Espheni and that only Tom can use it. Tom refuses to sacrifice Hal for the greater good and leaves.[8]

The Dornia communicates with Tom again and reveals that the being that Ben saw through the Shadow Plane was the Espheni Queen who only comes to a planet when victory is certain. The Dornia has been absent for awhile as the queen's presence makes it hard for it to communicate with Tom. The Dornia tells Tom that it is the last of its race and has "vowed to take throughrough action to honor it." The Dornia had saved him in hopes of finally defeating the Espheni and it gives Tom a weapon that will wipe out the Espheni if used in their queen's presence. The Dornia explains that it had forged a mutual trust with Tom who the Dornia saw as a soldier capable of delivering its weapon. The Dornia begs Tom to take the weapon and find the queen, promising to do its best to lead him. Tom takes the weapon and when he looks around, the Dornia is gone again. Anne and Marty later experiment with the weapon and discover that its a virus so deadly, that it could wipe out humanity. While Anne fears that the Dornia may be using them, Cochise suggests that the Dornia simply may not have known the weapon was deadly to humans as well. Marty is able to modify the Dornia weapon so that it is harmless to humanity. The weapon's power is proven when it is used to kill the Alexis clone who's cover story made it seem like the Dornia had rescued her too from the destruction of the power core. (Reunion)

Tom is able to use the Dornia weapon to kill the queen and destroy the Espheni, avenging the Dornia race. After discovering that his wife has died, Tom remembers how the Dornia had saved him and brings Anne to the beach where he last saw the Dornia. There he takes Anne into the waves and begs the Dornia to save her since he gave them what they wanted, their vengeance. After a moment, tentacles emerge from the waves and take Anne. The Dornia resurrect her and are even able to save her unborn child. It is unknown what happens to her after this but due to the hyper-advanced bio-technology of the Dornia, it is possible that she will rebuild her race from scratch. (Reborn)

Concept Art
Add a photo to this gallery

Retrieved from "https://fallingskies.fandom.com/wiki/Dornia?oldid=49352"
Community content is available under CC-BY-SA unless otherwise noted.