The Espheni cocoons are used to house unspecified organisms, but also used to house humans, such as Anne Glass and her daughter, Alexis Glass-Mason, though both their cocoons looked different, and had different effects. Anne's kept her asleep, whereas Alexis' did cellular metamorphosis. This is likely because Alexis states that cocoons are also used by the Espheni for stasis to protect them during the elements during long journeys. The cocoon Anne was held in was likely one of this type rather than the metamorphosis-type cocoon.

The cocoon appears to have a soft golden glow, its skin having yellow and red splotches, with translucent patches, and black spikes on its outer skin. It attaches to the walls nearby with a weblike substance.

According to Shaq, a Volm warrior, they attack both the mind and body of the housed organism. The hatchlings come out more violent and unpredictable than when they went in. Shaq also said that they have never successfully pulled an organism out of them alive, and they destroy every cocoon they see. Dr. Kadar compared it to a butterfly and a chrysalis, if someone would pull the butterfly out before it's ready, it dies. Dr. Kadar also said it appeared to change Alexis on a cellular level, as they changed her eye color. Both of these imply a flow of nutrients and bodily metamorphosis, which backs the butterfly-and-chrysalis comparison. However, the eye color change may have to do with her decision to embrace the Espheni rather than her human family as her mother noted that her eyes returned to the way they were before the cocoon when she rejoined the humans and sided with them over the Espheni.

In Space Oddity, Lexi tells her father that the Espheni also use cocoons for stasis during long journeys. The cocoons protect them from harsh temperatures and even in situations where there is no life support, keep the person alive inside. When creating such a cocoon, Lexi states that the substance she is secreting contains amino and proteins and is too complicated to explain. She also states that it is oxygen-rich and that by ingesting it, it will settle in Tom's lungs and nourish him to keep him alive. Indeed, even though Lexi shuts down their Beamer's life support completely, the two are unharmed by either the lack of oxygen or the extreme cold that results. Unlike the earlier cocoons, this one appears more like a butterfly cocoon than a typical Espheni cocoon. In the cocoon, the two share a dream due to both of them being inside the cocoon unconscious at the same time. They also discover that the being inside the cocoon has to wake themselves up, but Lexi and Tom have trouble doing so at first as Lexi doesn't know how. They eventually succeed by concentrating together once they are both ready to wake up and are able to wake themselves up from the dream the cocoon made them share. Afterwards, in Shoot the Moon, Lexi is able to use the remnants of the cocoon to enter her father's mind and speak with him to say a final goodbye.

In Reborn, the 2nd Mass heads to the Lincoln Memorial to take down the Espheni Empire, going through secret underground tunnels, they discover a nest of Espheni cocoons. It's later revealed the Espheni are preparing to fully occupy earth, with the Espheni Queen recent arrival, which is why the heavy amount of cocoons. When one of the soldiers accidentally disturbs a cocoon, it hatches, killing him. Several other hatchlings begin to attack, after a brief fire fight, Demarcus Wolf kills the hatchlings with a grenade launcher. After Tom kills the Queen, the Espheni Empire, along with the remaining cocoons are killed.

Anne inside a cocoon.

Alexis creates cocoon with her hands

Alexis and Tom asleep in a cocoon 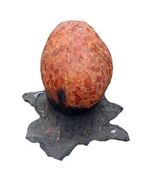 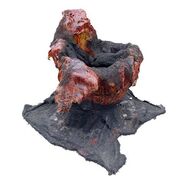 Behind the Scenes 'Hatched'
Add a photo to this gallery
Retrieved from "https://fallingskies.fandom.com/wiki/Espheni_Cocoon?oldid=47718"
Community content is available under CC-BY-SA unless otherwise noted.