Uncle Scott was a civilian traveling with the 2nd Massachusetts Militia Regiment. Scott teaches the children biology, fixes a tube radio and discovers that the Skitters communicate on fluctuating frequencies. His suggested jamming repels an attack on the school. Scott dies protecting children in the Battle of Fitchburg, about a month after Tom is abducted by the overlord at the end of Season 1.

Scott is Anne's uncle, though it is never revealed whether he is a blood relative or if they're related solely through marriage. Scott, Kate, Anne and Sam went on a weekend trip to Lake Huntington, and while fishing with Sam, Scott caught a fish but as soon as he pulled the hook out it swam away. It can be inferred, that Uncle Scott was likely a teacher pre-invasion.

The morning of the exodus from Boston, Uncle Scott is working on one of the trucks getting it ready to move. Captain Weaver comes along and asks how long it will take, which Scott says it will take a few minutes. Weaver tells him he has ten and leaves, leaving Scott grumbling. His niece, Anne Glass, then approaches carrying a box of medical supplies, asking if she should load them in bags or the truck. He says the truck and continues working on it, while his wife, Aunt Kate, leans out the window and says bags, agreeing with Anne. As if on cue, Scott fixes the problem and the engine sputters to life, causing him to turn at the two disbelievers. They finish loading the supplies and begin to drive out with the rest of the 2nd Mass.

Uncle Scott asks for Tom to meet him to speak about something important, he is teaching a class while Tom arrives then speaks to him about the skitters and the mechs.

When Pope is taken prisoner, Scott cooks a meal for him and gives it to Pope, but the meal is criticized and Pope explains what he should've done. When Pope makes a pot of soup, Scott is one of the civilians who taste it first, and admittedly likes it.

While at John F. Kennedy High School, Scott has taken up developing homemade explosives and also puts together a primitive radio from a "fallout shelter tool kit". Matt Mason is Scott's helper with the radio, turning the handle to try and receive communication. Anne later thinks the static from the radio is from the skitter, and Scott tells Harris what he heard with the radio static.

Scott continues to work on the explosives and the radio, when he plays a record Weaver enters and turns it off, saying he cannot play that song. Scott later speaks with Anne Glass, Scott tells her that himself and Kate are going to put up something for Sam Glass on the bulletin board. Soon after Scott witnesses Michael Harris being killed by the skitter and tries to help, however cannot. Scott later helps out with de-harnessing the kids.

Uncle Scott along with Matt is still working on the radio and the explosives. John Pope is assigned to build explosives as he is the only one with knowledge about them. Pope walks into the room while Scott's working and tells him that his ratios for the explosives are all wrong and that they'll blow their heads off if they use it. Scott shows the scrap mech parts to Pope, and when he presses on one of the mech parts it shoots a hole in the classroom wall. Matt stares at the mech part in fear and Scott tells him that it's okay before he walks out of the room.

Scott is working on the transmitted, and Ben arrives as the room Scott is in has all the books stored. After Scott tells Ben that Matt's now helping Pope, Ben decides to help Scott with the transmitter, and Scott teaches him about the parts. As Ben is instructed by Scott to turn the dial, Ben hears a noise which causes him pain, and asks if Ben is okay before he leaves. Later, Ben returns and asks if the two are friends, and that he needs him to turn the dial. When Scott does, Ben again is caused pain, learning that he can hear the transmitter signal. Later, Scott and Ben tell the news to Ben's father, Tom.

While fixing the transmitter, Scott hears a noise, looks to the ceiling and is jumped on by Rick, throwing Scott to the floor. Scott suffers a gash on the back of his head, and goes to the clinic where he was treated by Lourdes Delgado and tells Tom that Rick was just hanging from the ceiling, and that he took a part from the transmitter that is needed to make it work. After Tom chases Rick and retrieves the part, he returns it to Scott who is surprised he didn't crush it. Scott and Ben work on the transmitter, however Tom tells then that Ben will leave with the rest of the 2nd Mass civilians, but Scott convinces Tom that it's their only chance to beat the aliens. With failed tries, they finally get the right signal that can jam the aliens, but the signal is not high enough. Ben grabs the cables and jumps out the window, however Scott tells him that he'll get one of the fighters to connect it to the flag pole. Ben succeeds on connecting the cable, and Scott cheers.

Four weeks after Boston, he was sick. Anne told Lourdes they needed to get his fever down, that he was slipping into pneumonia. Lourdes asked how bad he was, Anne felt that even with the right medicine it wasn’t good.

Later Anne is trying to get Uncle Scott to eat some soup. He says she should be taking care of others, that there wasn’t much she could do for him. Anne told him she’s the doctor so to open up when she said so, in the middle of this she is distracted by Lourdes treating another patient. So Uncle Scott finishes by saying to keep his mouth closed when she says so. She tells him to get some rest. Later he is sleeping but weak. As Uncle Scott is escaping with a group a kids, a Mech targets a teen but Scott pushes him out of the way and the Mech shoots Scott in the chest.

When Tom returns to the 2nd Mass, Anne reveals to him how Uncle Scott died. Anne tells Tom that he was killed by Mechs during the Battle of Fitchburg while protecting Anne and a group of children.

During Fitchburg, Scott and the 2nd Mass kids are forced to retreat with skitters and mechs on their tail. When a mech prepares to shoot at them, Uncle Scott throws himself in-front in an effort to let the kids gain more ground and escape. Scott is tore apart by mech bullets and instantly killed. 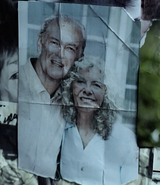 Scott's picture pinned up by Anne so she can remember the ones who died.
Add a photo to this gallery
Retrieved from "https://fallingskies.fandom.com/wiki/Uncle_Scott?oldid=49142"
Community content is available under CC-BY-SA unless otherwise noted.